Thanks for checking out our site! We’re Fort Worth Paving Pros, the DFW areas leading paving company in both concrete and asphalt.

We’re set up to take on jobs of almost any size, from a small concrete walkway out to a granny flat or studio, right up to huge commercial asphalt parking lots.

We’re also specialists with years of experience — we only provide one service: paving. This means we stake our entire reputation and profitability on doing a fantastic job, every time.

We repair and build paving installations and we work exclusively with asphalt and concrete. All of our quality work comes with a free site inspection, a no-obligation quote and a careful attention to ongoing customer service. If you have any questions, either before the build begins or after the build is finished, we will be available to help.

Here’s some more information about the elite asphalt and concrete services we provide in the Dallas Fort Worth, Texas area. 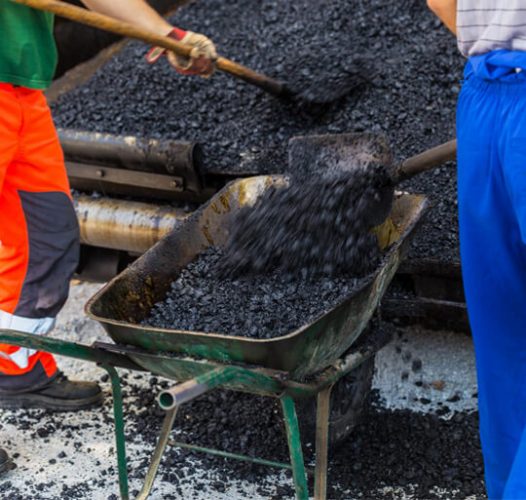 Asphalt is perfect as a new construction material when it comes to durable, effective and simple surfacing. Our asphalt is top notch and carefully finished to be as resistant as possible to surface erosion as well as great to look at. It's perfect for commercial applications and residential paving on a budget. 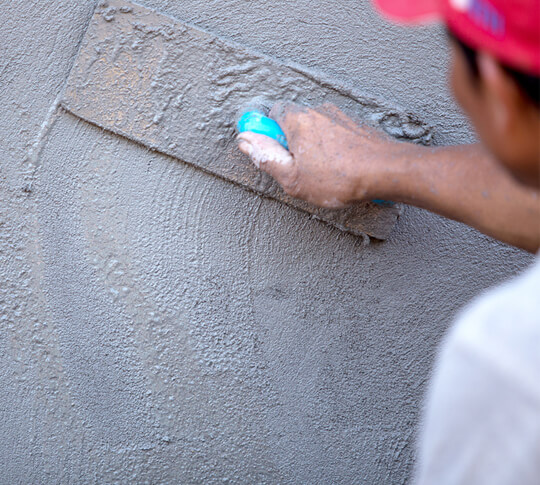 We’ve seen it all and can repair it all. If your paving area is only mildly affected by small cracks or surface erosion, we can fix that quickly so that it looks as good as new. We can also tackle larger problems, like drifting slabs, potholes and fissures in your asphalt or concrete.

A quick and reliable way to add years to the life of your asphalt paving, sealcoating is a surprisingly inexpensive service. For an average sized area, we are typically done within the space of an afternoon, and your asphalt paving will be left looking as good as the day it was poured. 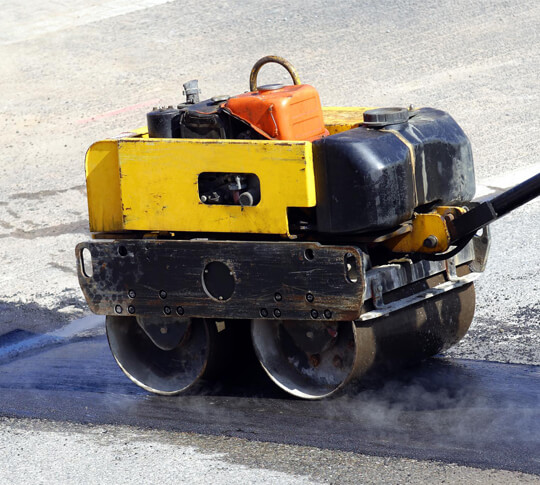 Concrete paving is a well-used and well-known way of making sure that an area of land is protected as well as durable. We can deliver a fun array of finishes: color staining, stamped finishes and high traction textures are all possibilities we can explore with you. 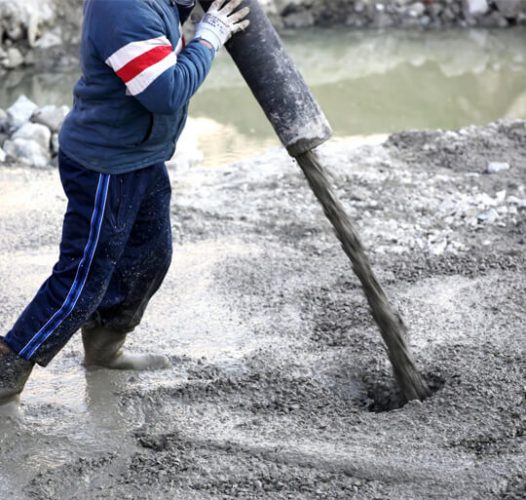 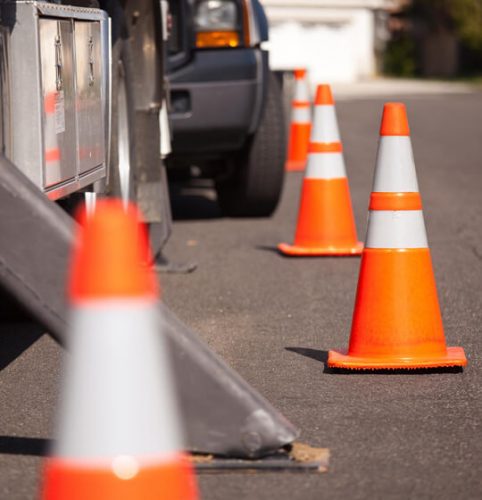 Fast, reliable and professional commercial builds which minimize your business disruption. This is a hard ask for most paving contractors, but we’re specifically equipped to deliver this level of agility and flexibility. 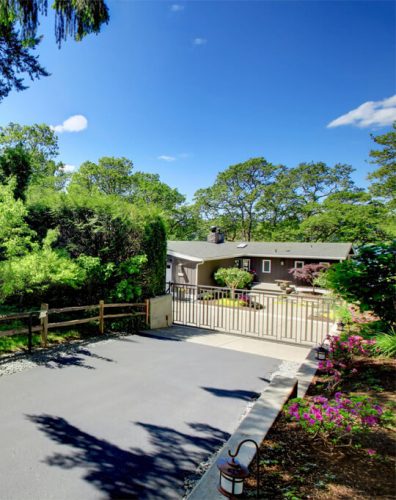 Our driveways are undoubtedly our most eye-catching product. We don’t aim for utilitarian and efficient. We aim for nothing less than beautiful! Our concrete and asphalt driveway installations are designed to blend in perfectly with your home and natural environment. What’s more, our asphalt (blacktop) and concrete driveways are carefully finished to deliver a pothole, crack and subsidence free parking surface for years.

We’d love to hear from you! We are a full service concrete and asphalt paving contractor for Fort Worth,Dallas, Grand Prairie, Arlington, Lewisville, Irving, Plano and other North Texas cities. Our paving customer support team can answer any of your questions and will be happy to schedule a free site inspection with you, if you’re interested. So give us a call or request a free quote. We’re all too happy for your business and commercial or residential inquiries are equally welcome.

GET A FREE ESTIMATE 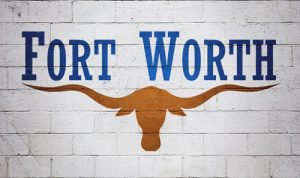 A lot of Texas towns have history. Pass through even the smaller Texas towns and you’ll likely stumble across a local museum, graveyard or old building with a story to tell.

Fort Worth is no exception. It’s brimming with historical anecdotes, so much so that you can barely turn a corner without finding some reminder of its colorful heritage.

Then there’s Fort Worth’s … weird history … for want of a better term. Weird history tourism is a sub branch of the vacation pop culture phenomenon known as dark tourism — the pursuit of out of the way oddities in hard to find places.

Fort Worth is a goldmine for people seeking out these odd historical corners. Here are a few of my favorites.

You’ll probably have heard of Bonnie and Clyde. This gangster couple were fearsome enemies of the police and respectable Fort Worth citizens during the prohibition era. They committed a string of violent robberies, gunning down any police officers who dared apprehend them.

There’s a mystique about the couple which persists to this day. After all, Fort Worth’s annals of history are no exception to the universal rule that “all the world loves an outlaw.”

In 1934, Bonnie and Clyde finally met their fate. Texas Rangers, Frank Hamer and L.A Kindell learned the location of their hiding place and ended their 2 year crime spree with a hail of 167 bullets, rendering them deader than dead.

Dark tourists passing through Fort Worth can find Clyde Barrow buried in a family plot beside his brother Buck Barrow who also happened to have been killed in a showdown with police.

From lights that were extinguished before their time to a light which refuses to dim.

Fort Worth is home to the second longest burning light bulb. For people in hunt of the weird and obtuse, there’s something oddly appealing to a lightbulb which is only the second longest running in existence. It somehow adds to the bulb’s street cred.

Grandiosely dubbed The Eternal Light, the bulb was originally located at the Byers Opera House in Fort Worth where it was first installed in 1908 by an opera stagehand. One hundred and eleven years later, the bulb still burns bright, though its home was transferred to the Livestock Exchange Building in 1977 when the opera building itself was demolished.

It has only been turned off once, briefly, by accident. Other than that, the eternal flame burns on. 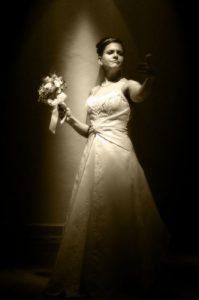 It’s an odd addition to the museum, not really having a lot to do with Fort Worth’s stockyard heritage. But here it lives, bequeathed to the museum by a superstitious wealthy benefactor, who inherited the dress but wanted nothing whatsoever to do with it!

The Dress is, admittedly, oddly creepy to look at. Made in 1886, it’s a faded ivory dress of frills, ribbons and bows. Something about it exudes a subtle aura of saddened disappointment. It would look quite at home on a (possibly possessed — I’ll leave that to your imagination) life size Victorian era doll.

The dress is reputed to have had four owners over its 136 years of existence. Three of the owners “lost their husbands” (though details of the exact nature of this loss are rather sketchy) and one lady became grievously ill.

While anyone of a superstitious bent is unlikely to want to get too close to this husband-killing piece of attire, it’s a great option for those passing through Fort Worth who happen to enjoy a touch of macabre and old lace.

Fort Worth was once a popular stomping ground for Wild West legends. Some of these household names were well-meaning entrepreneurs or adventurers just looking to survive and get ahead in a dangerous time. Others were straight up outlaws.

The Fort Worth Five definitely fall into this latter category. The Fort Worth Five, also known as the “Hole-in-the-Wall Gang” were infamous bank robbers who evaded capture despite local Fort Worth law enforcement’s best efforts. Butch Cassidy was the gang’s most famous member and was considered their dangerous ring leader.

In 1900, the gang made an odd decision. They decided to sit for a photo portrait. The picture is now famous. Five smirking mustachioed dandies sit for the camera on a weirdly incongruous chaise lounge, a hint of a threat smoldering in their eyes.

The picture was actually instrumental in the gang members finally being apprehended, as its presence in the studio’s shop window was noticed by a local Fort Worth detective.

The photo and the studio from which it sprang can be found between Fifth and Sixth Street in Fort Worth’s downtown district.

Fort Worth has a lot to offer conventional historians. It also has much to see if you lean to the more macabre corners of Texas’ long and eventful history. If you’re passing through Fort Worth and looking for a little strangeness, you can’t go wrong with these unusual attractions.